Syria is a journalistic hell

Journalists struggle to get credible and impartial news in Syria.

The Syrian crisis has been a major topic in recent news. The horror faced by the Syrian citizens has left the world in shock and caused major political controversy including question of journalistic practices in war zones. Due to the extended coverage of this event personal convictions are especially noticeable when examining different broadcasters.  Yet, journalists from different broadcasters all agree that reporting impartially in Syria is hard if not impossible as they face many hardships.

The main reason why reporters struggle to obtain impartial news is because they are forced to choose sides. Like BBC’s freelance journalist Maurice Aaek says: “The first question journalist will be confronted with is whether they are a ‘nationalist or a traitor’ (when asked by the Syrian government) or a ‘criminal or a rebel’ (when asked by the opposition). The answer to either question is rewarded by one side and punished by the other.”

In other words, reporters are forced to make a choice between the opposing views. In doing so, reporters do not get to see the broader picture, but instead are only shown and told a one-sided story.

Though many would argue that journalists should simply switch between the opposing sides, the reality is proven much harder. Like Maurice Aaek explains: “The territory controlled by the government and opposition is also neither clear nor fixed. It has become a complex map changing on a day-to-day basis. It is impossible to move between areas dominated by either of the sides without passing the other. Before angering either side, journalists have to take into account that they will have to deal with both sides sooner or later.” 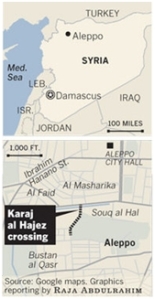 Moreover, journalists are increasingly becoming targets in Syria. This makes it even harder for journalists to report. According to the International Federation of Journalists, 35 reporters were killed in Syria in 2012. In 2013, however, media reports noted that in August alone, nine journalists were killed. When comparing these figures to Afghanistan where only 24 journalists have died since 1992, one needs to question if journalists can produce credible and impartial news.

The majority of journalists however, just disappear.  Journalists like Temoris Grecko, James Foley and Balint Szlanko were all kidnapped at the Bab al-Hawa Crossing (west of Aleppo). Sadly, up till this day there is still no knowledge of the detainees’ condition nor have there been requests for ransoms.

For this reason, journalists generally agree that Syria is the most dangerous country to report from. Reporters Without Borders even called Syria “a Bermuda triangle for journalists.”

Other reporters, however, simply to choose not to go to Syria altogether, as they do not want to risk their lives for a job they cannot fully practice.

In conclusion, the authorities and their allies do not tolerate impartial or moderate journalists. Instead journalists are pressured to choose between one of the opposing factions and once this decision has been made they are forced to stay with said group, unable to ascertain a broader understanding of the situation in Syria. Nevertheless, due to the issues of safety perhaps we need to consider how journalists can produce valid and credible reports, when they are threatened at all fronts.